I feel petty, oh so petty!

To supplement my regular dose of Pugwash's Almanac, The London Philatelist's Review and Pausey's Ladies Entomological Registry, I receive on a monthly basis that pinkest of periodicals, Girlfriend (this month with free bronzer, which, applied according to the manufacturer's specifications, will make me, ahem, tan-u-licious).

Girlfriend connects me to the teenagehood I never had. The one where I accessorize my way to happiness, invest in hypercolour mascara, write a 25-word account of a tampon falling out of my schoolbag in the presence of my BF for the "How embarrassment" column, expose my belly button to all weathers and think that Scorpio boys are super cute. I did the quiz and apparently I'm a perfect match for Michael Cera.

For all this, I am of course grateful. Not so grateful, however, that I will let pass egregious miscalculations from the "13 Bits of Useless Trivia" page: 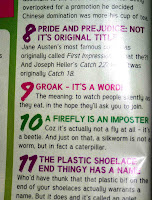 While we're on the subject, "groak" is only a word if you believe the intertubes. We who snootily regulate our vocabulary according to the OED will snub "groak" at every turn.

P.S. On reflection, it's not Girlfriend's dubious mathematics that I object to, or even its propagation of "groak": rather, its narrative of compulsory adolescent heterosexuality, where a girl's value resides in her eligibility as a girlfriend, that eligibility in turn attained by her spending sixty times her pocket money on unguents and googaws without which she will be hideous.
Posted by Alexis, Baron von Harlot at 8:21 am 18 comments:

Things that start with P

Spotted my first little sprig of white hairs this morning. Six of them, just above my left temple.

I'm almost as excited as when I got my first pimple.
Posted by Alexis, Baron von Harlot at 8:16 am 13 comments:

We have thirteen teaching weeks per semester at Mine August Place of Employ, and as of yesterday, we're in Week Ten. Next week is Mid-Semester Break. Did you hear that? Mid-Semester Break. Next week. My question is: does "mid-semester" or does "mid-semester" not denote that portion of time in a semester so situated as to have an equal number of equal portions of time before and aft? I.e., in a world which took the word "mid-semester" seriously, in a world where the semester consisted of thirteen teaching weeks, would the mid-semester break fall somewhere about the sixthish (maybe seventhish) week or would it not? In a world where justice and compassion reign, would the Office Responsible for Scheduling Mid-Semester Breaks think it a very fine thing to subject browbeaten, grindstonenosed, wheelshouldered, elbowgreased, bestfootforwarded gentyll scholares to ten (TEN!) continuous weeks of unadulterated enclassroomination? I think not.

(Not that I'm exactly planning a jaunt to Barbados. A leisurely pootle through a forty centimetre high pile of essays should keep me on the straight and unCaribbean.)
Posted by Alexis, Baron von Harlot at 5:32 pm 3 comments:

While this blogge deplores dog-breedism and disapproves mightily of eugenicist interventions in the puppitariat's collective sex life, there is no denying: the beagle is a beast beyond compare. Not only can he sniff out decomposing marsupials within a five kilometre radius, not only can he cajole seven times his daily calorie requirements with a single whimper, not only can he melt steely-hearted misanthropes into soft-centred coo-mongers, not only are his armpits bald, but, lo!, he can escape impregnable dog-coops in a single bound. To wit:

(Special thanks to ex-Leichhardtian next door neighbour, Monsieur le Webster, for alerting me to this footage.)
Posted by Alexis, Baron von Harlot at 9:15 pm 6 comments:

A young scholar has informed me that, square foot by square foot, linoleum is now more expensive than tiling. ("And thus the contemporary English syllabus?" well may you splutter.) In trying to verify this through ye google, I happened upon marmoleum, which, sure, sounds like a dubious breakfast condiment (from the nation that brought you Fluffernutter), but is in fact an amazing brilliant all-purpose wonderfloor, made of linseed oil and jute, antistatic, with antibacterial properties, in an inexhaustible range of colours and flavours, praise be its marmoleal name.

Here's what I predict (you read it here first, internetians): by the year 2017, entire streets will be lined with marmoleum, children's toys will be made of marmoleum, people will eat marmoleum, and the bearers of staphyloccocal infections will take it intravenously.
Posted by Alexis, Baron von Harlot at 6:47 pm 10 comments:

Like a man at a jury selection panel wearing a three-piece suit, a monocle, and an "I heart capital punishment" lapel badge (also side-whiskers and spats), when I received my invitation to orate on "study skills" to the young scholars at my local residential hall, I replied immediately, thusly: "Thank you for your kind invitation to speak on study skills at –– College. I should be very pleased to offer a talk on 'How to Procrastinate', in which I will consider in depth the cases of Hamlet, Charlie Kaufman, and P. J. O'Rourke."

Did they realise, then and there, that I was not the man for the job? No, they did not. No, they said, "Excellent! How are you placed for next Monday?" And I, having exhausted my repertoir of evening-oration-at-residential-hall evasion tactics (or was I trying to put off my essay marking?), replied, "Next Monday, c'est parfait". Or words to that effect. I'm sure I implied my dessert preferences somehow.

So, here's the deal, chaps: I am going to sever my attachment to all forms of telecommunication over the weekend, with the possible exception of yon noble carrier pigeon, and when I return on Monday morning, I'd be much obliged to find a 20 minute talk on procrastination lodged under the comments function. In my gratitude, I will have you all over to Harlot Heights for parfait with strawberries, and we will sit around marking my essays together - there being no jollier jape in town. In addition to parfait with strawberries, you will gain from this exercise in the following key learning areas: typing skills, waffling skills, teamwork skills.
Posted by Alexis, Baron von Harlot at 2:36 pm 3 comments:

Arch-critic, Glam Girl, shows the world why it's all wrong about William Shakespeare. Quoth she, speaking of some overwrought, underpunctuated, johnny-come-lately excuse for Renaissance tragedy, "I think it's an ok book but needs to be improved on structure and also punctuation and sentences do not make sense to me. If it is to long people won't be bothered to read it and also it is boring so why would they read it in the first place."

Dogs have bald armpits.
Posted by Alexis, Baron von Harlot at 11:38 am 10 comments:

You know what tickles my fancy? This: when the vastly underappreciated etymological relationship between nouns is revisited in their adjectivisation. You forget that "parable" and "parabola" suckled at the same teat (or adjacent teats), until you come across "parabolic". Likewise "genus" and "genre" with "generic". Speaking of parables, one of my all time favourite noun-to-adjective thingies is "fable" to "fabulous". Truly, all other pleasures pale.
Posted by Alexis, Baron von Harlot at 7:00 pm 3 comments:

This week's award for Stoicism & Service in Time of Need goes to – da da da daaaaa! – my kettle!

That's right, you, kettle, have won this week's award, and in recognition of your excellence in boiling beyond the call of duty, you and an electrical appliance of your choice will be flying on an all-expenses paid trip to [no, sorry, can't remember where exactly, we'll get back to you].

Meanwhile, back in the bathroomy bit of Harlot Heights, we are now nearing the end of the Sixth Daye of Yon Waters That Be Notte Heated, and I am fast developing a resistance to personal epidermal scum, malodorousness and typhus. Bill and Mitch popped by this morning to offer their professional opinion on my water heater, and it turns out that their professional opinion is that it is a perilous and illegally installed pile of poo that should be cast into the wilderness while they plug in something much schmankier for $2500. That's just a rough estimate, mind you. They said they'd send me a proper quote soon. Perhaps this one, by G. K. Chesterton: "I believe in getting in hot water; it keeps you clean".

That said, I would like to put on record my solemn refutation of that old adage, "Cleanliness is next to Godliness". This is simply propaganda put about by the people who sell bath towels. Max Weber wrote about it in Die Protestantische Ethik und der Geist des Kapitalismus, which I deem an irrefutable authority on the subject. The alleged proximity of the clean and the godly is a lie (John the Baptist and his foot-washing an exception, of course, though I'd be very surprised if the water he used was completely free of camel dung).
Posted by Alexis, Baron von Harlot at 6:38 pm No comments:

The Great Unwashed, no longer

Unpeg your noses; I have just had a shower.
Posted by Alexis, Baron von Harlot at 1:56 pm No comments:

Not in hot water

I've had two months of glamorous second storey living in Preston Heights and now the hot water system has kicked the bucket. Fortunately, I have another bucket, and a kettle, and a washer, and this morning I was able to arrange a human cleansing apparatus in the kitchen. Bathing out of a bucket is good water conservation practice. Indeed, I'm about to draft an official recommendation to the Brumby government: bucket-based bathing, the optimal solution to Victoria's water shortage. I'm not convinced that I have obtained the levels of personal enscrubbedness which polite society requires, but if rancid body odour was good enough for Rasputin, it's good enough for me.
Posted by Alexis, Baron von Harlot at 9:09 am 6 comments: