What I am about to type will disgust you

So if you don't want to be disgusted, admire these wholesome family portraits and then flee from this site, preferably sprinkling yourself with holy water and applying one of those plague doctor masks with the giant crows' beaks as you go. 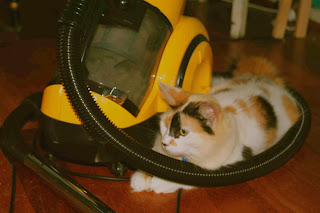 Wholesome Beatrice, getting down low with the Dustmaster 2000. 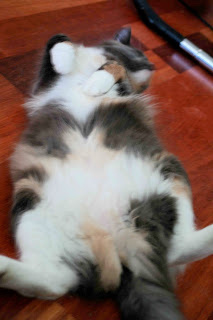 Wholesome Harriet of the unsmutched belly.

Now, vamoose, especially if you (a) work with me, (b) are likely to see me in the next week, or (c) are in the habit of excommunicating people on grounds of poor - nay, criminally negligent - hygiene. If, on the other hand, you want to wallow in fresh depths of disgustation, then huddle round and make sure you've got your bleach handy, because [da da da dum] I have worms. Thread worms. In my digestive tract. And it's a good thing, too, because if I didn't have worms - according to last night's google research - I'd have haemorrhoids, and apparently the only thing you can do for haemorrhoids is shove anaesthetic cream up your bottom, give up sitting, and betake yourself to the barber surgeon for a quick haemorrhoidectomy. All you need to dispose of worms, on the other hand, is a single dose of over-the-counter vermicide and then a brisk incineration of your house to get rid of the eggs.

I only realised that I have worms this morning, and I have since showered three times, invested in a six-pack of the aforementioned over-the-counter vermicidal tablets, a new nailbrush, and a bottle of strawberry flavoured Belgian beer (for inner cleansing, etc). I have also undergone six psychosomatic parasitosis-induced hysterical episodes, for which the beer would be useful, but I'm keen to keep my wits about me. Last night, as I lay in bed failing to get to sleep because my fundament was itching and I was pondering the fate of my benighted nethers, my mind turned - as minds do in these circumstances - to the public history of my bottom. I had a sudden terrible vision of the time my mother waited for the entire family - sisters, brother, sisters' boyfriends - to gather round before attacking the splinter that had lodged in my left buttock no-thanks-to-the-cats-tongue-wooden-floorboards-at-ballet-class. And another sudden terrible vision of the time I came home from a birthday party with a yellow paper dog mask, took off my party dress and sandals and socks and underpants, found my yellow - that is to say, horseradish, that is to say, supposedly dog-coloured - skivvy, donned it and the mask and beetled off down the street on all four feet with my naked bottom wagging. Neither of these terrible visions was as terrible as the terrible vision my mind was concocting of the gloved doctor preparing herself for my haemorrhoidectomy, and so I was glad when I woke up this morning and realised with dawning clarity that I have worms.

What troubles me, of course, besides the fact that there are small creatures roosting in my hindquarters, is that there is something seriously wrong with my hygiene routine. I mean, I wash my hands after going to the loo, with soap!, and I don't make a habit of sniffing other folks' bums or handling raw sewerage, but in the last year I've had my first wart, two cats' worth of ringworm, and now this. Noone has ever, ever, ever told me that they have worms. Ever. So I have no way of judging what a reasonable rate of infestation might be, but this - this doesn't seem reasonable.
Posted by Alexis, Baron von Harlot at 3:37 pm 8 comments:

Which smartysocks decided that "unrelenting" gets to be a word but "unrelent" doesn't, eh? She's messed up my scrabble game, whoever she is.
Posted by Alexis, Baron von Harlot at 1:20 pm 2 comments:

I think I'm in love

This also is cool

You'd get to thinking you were quite important.
Posted by Alexis, Baron von Harlot at 8:27 pm 7 comments:

Harlot folklore has it that it was good old me who suggested we call Aristotle Aristotle. I was five at the time, and he was a wriggly round puppy with a leg at each corner. In my memory, I spent days lobbying for Daisy. Someone had told me that chihuahua puppies were small enough to snuggle inside matchboxes, and I was wishing my socks off that at the last minute the beagle elect would be replaced by a chihuahua.

The beagle won, thank Dog, and Aristotle trumped Daisy. I don't remember giving up on Daisy, but the collective account is emphatic. I chose Aristotle. I do remember, afterwards, being inordinately proud of having fished out such an illustrious name for the wonderdog.

Until I realised what a total doofus Aristotle's namesake was. Exempli gratia:

But is there any one thus intended by nature to be a slave, and for whom such a condition is expedient and right, or rather is not all slavery a violation of nature? There is no difficulty in answering this question, on grounds both of reason and of fact. For that some should rule and others be ruled is a thing not only necessary, but expedient; from the hour of their birth, some are marked out for subjection, others for rule.That's just charming, that is. Much worse than his theory that babies happen when an Athenian plants his homunculus in the nearest vessel's menstrual blood.

But this is kinda cool. In De generatione animalium, Aristotle classifies animals into five groups: mammals; ovoviviparous sharks; birds and reptiles; fish, cephalopods, and crustaceans; and insects. And might I just add how impressed I am by those sharks, who keep their eggs in their bodies until they're ready to hatch. Way to avoid the omelet factor.
Posted by Alexis, Baron von Harlot at 5:45 pm 3 comments:

The Ambassador for Preston, reporting for duty

Last you heard from your feckless narrator, she was inspecting formaldehyded fœtuses east of Weimar. You could be forgiven - considering the silence round these parts - for assuming that she had since perished from a surfeit of sauerkraut and extrawurst, but in fact I've been moseying my way back to the internet, via a series of airports, northern hemispeherean cities, an overdue essay, and the two weeks' effluvium that spewed from my pigeonhole at Good Old Work.

Speaking of northern hemispeherean cities, my sister & co. took me on a speed tour of Tokyo, the main effect of which tour (besides how hugely nice it was to see my sister & co.) was to make me ashamed of Australian dunnies. Seriously, Japan's got it all over Australia in the plumbing department. 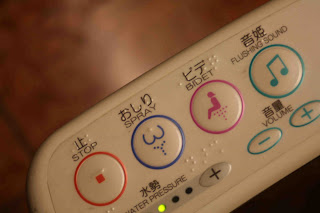 Above, for instance, is a Japanese toilet console, which plays prerecorded gurgling noises, sprays your nethers with gently warmed toilet nectars, and adjusts seat temperature to taste. Where I come from, you're lucky if you have a hole in the ground and a sheet of newsprint. What, a hole? When I were a lad, had t'defecate into thin air, I did.

Speaking of such savoury matters, here is a giant Japanese poo: 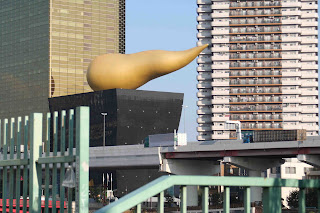 Or possibly a sweet potato. I couldn't tell, but sister & co. were pretty certain it's a giant poo.

And what would be the point of all this attention to gross domestic product, were there not also things to eat? 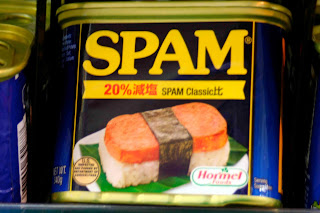 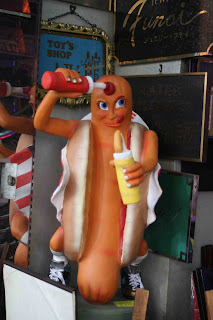 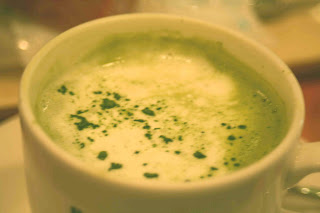 Or this actually quite potable green-tea-ccino.

As my father's fond of saying whenever the opportunity arises, "I see travel's broadened you."
Posted by Alexis, Baron von Harlot at 9:38 pm 6 comments: