So, word on the cat front: Harriet has embarked on an exciting career as an experimental physicist (take one glass of water, observe, enact deliberate sideways swipe of paw, measure resultant hydrocity, remain scientifically skeptical of so-called law of gravity and repeat experiment when opportunity presents). Beatrice, meanwhile, has been non-consensually entered into a Perhaps - Certainly from the Tuna's Point of View - Pretty Darn Sinister Cat Food Sponsored beauty contest. For which beauty contest, N.B., victory is assured, especially if this blog's intrepid band of readers - yes, all four of you - contribute your electoral goodwill. That's right, all Bea needs to win $10,000 and her rightful place on the marketing material for Whiskas' Oh So Gelatinous! is the help of four ordinary, decent voters, four voters prepared to cast a hundred votes from a hundred IP addresses every day for ten consecutive days. If that sounds like your cup of lactose-reduced, go hence. One of the world's two loveliest kittens thanks you, or would, had she actually agreed to the latest installment in my regime of catsploitation.

In other catly news, Ben Pobjie - of the soon-to-be tragically moldering New Matilda - penned the following pome in exchange for fifty (50) dollars ($), that is, AU$50, a mere half of a hundred dollars, which actually pretty negligible sum (buys a lot of lentils, sure, but not many movie tickets), is going towards his campaign to get himself a berth at the 2011 Melbourne Comedy Festival, which I understand takes a great many lentils indeed. Here is his poem. I'm not sure about the closing couplet (Bea & Harry are both committed egalitarians), but I think the bit about the korma rivals P. B. Shelley at his least vegetarian.

Take it away, Pobjie:

They have done it before
One time Harriet was at the vet
And the vet performed certain actions
And lo, it was proved, the truth of that ancient aphorism writ large on the papyrus of history:
One man’s routine medical procedure is another man’s unprovoked sexual battery
Especially, as Diogenes said, if one man is a female cat
Which was probably more common in ancient Greece than it is now
And so Harriet took back the night

Two sisters
Ruling
Harriet, bestriding the world like titans of old, facing dogs, rats, and hoses alike
With calm equanimity
And regal grace
Beatrice, tiptoeing modestly through the corridors of life, self-effacing
And yet proud as legend’s faerie queens
Even when biting your arm

Thank you, Sisters
We, your slaves, await your order.
Posted by Alexis, Baron von Harlot at 7:08 pm 13 comments:

There's a yeast-based beverage for anyone who can tell me what this fungus is called. Its proper mycological name, that is, though I could probably see my way to a beer for anyone who tells me it's Queen Ann's Bloomers and perfect in your risotto al funghi deluxe. 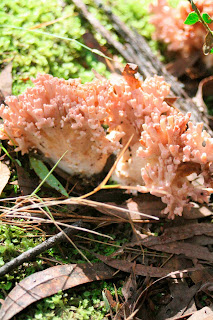 The Preston Heights ménage (two humans, two cats) visited Chateau de Mum (two humans, one dog, three chooks) last week, and rather than taking responsibility for the inter-species consequences (chooks-dog-cats, like rock-paper-scissors, except that cats seem to beat everyone else, especially if everyone else is the world's most chivalrous beagle and a trio of sensible bantams), I trotted off to take photos of fungi and other mycobiontical delights. Mum lives in front of a pine plantation, which means there are enough fly agarics to build an entire fairy Manhattan 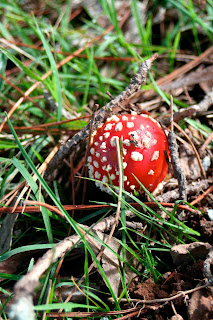 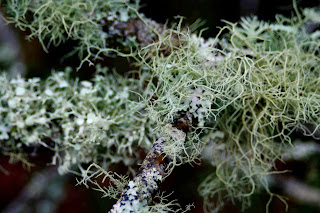 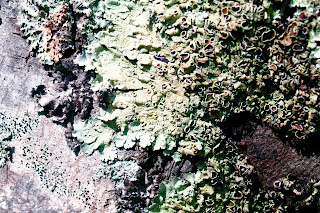 and this parmotrema something-or-other, which I wish I could grow across the walls of my living room. The trees look liver-spotted (who came up with that word, liver-spot? to say nothing of senile wart?). There's something about lichen that suggests the sturdy and eternal, even if itself it grows and spores and dies and grows. And p.s., for all you, who, like me, are enthralled by and grossly underinformed about matters micro/biological, lichens come about through symbiotic relations between fungi and algae or similar bacteria. How cool is that? THIS cool.

Now this, ladeez and gennilmen, is what I call a Home Theatre System. 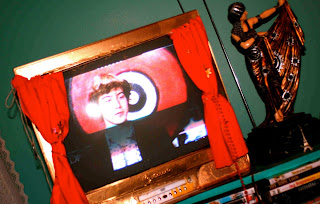 I use it to watch The Big Bang Theory and The Mentalist on Monday night, Monday night being telly night. I watch The Mentalist even though The Mentalist's plot goes like this: camera pans across decolletage of conventionally gorgeous young woman found mangled in clearly felonious circumstances; camera cuts to decolletage of conventionally-gorgeous-young-woman of a crime scene investigator who advances a theory as to nature and perpetrator of felony; Patrick Jane, aka the Mentalist, a sort of blond Byron-on-a-stick waltzes in and advances alternative theory; alternative theory proves to be correct. This, you would think, is hardly edifying fodder for a Baron about Town such as myself. Indeed, I would say in reply, but where were you when I needed three litres of intravenous chocolate after my four consecutive hours of Monday afternoon teaching?

It has come to my attention that my home theatre system may shortly cease to work on accounta not having an enigmatic piece of hardware known as a Set Top Box. I'm guessing that if I had the inclination I could procure myself a Set Top Box, but I'm not convinced it would go with my decor. I.e., do set top boxes come in spraypaint gold? If not, shame on them. 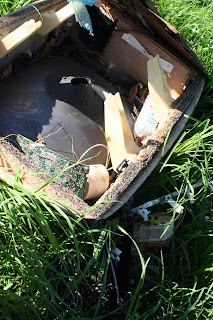 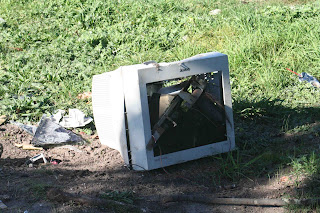 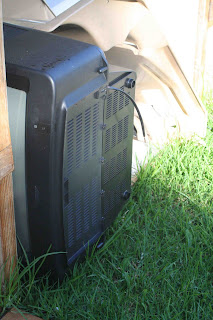 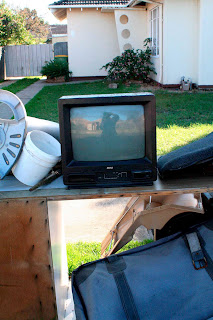 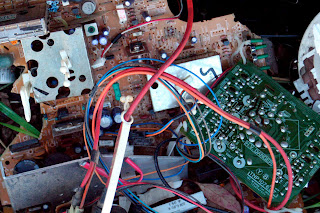 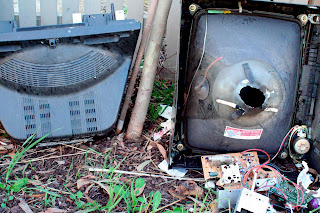 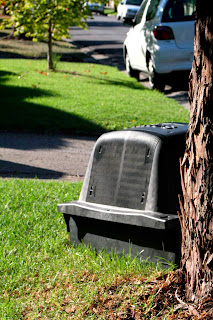 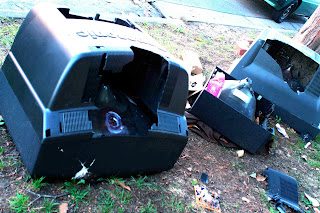 Home Theatre Systems in various stages of al fresco decay, photographed on my route to work
lead me to believe that the horrors of set top box purchase and possibly the sexual politics of channel 9 programming have caused the entire Australian population to chuck their tellies out onto the nature strip and take up more wholesome Monday night pursuits, like intravenous chocolate.

Here is my question to you, gentle reader, if you still exist: what do you do plan to do on Monday nights after your Home Theatre System ceases to function? And can I come too?
Posted by Alexis, Baron von Harlot at 5:44 pm 10 comments: