Fill in the blanks

P.S. the Jermin for hippo is Flußpferd. Learnt that today while looking at a hippo's skull. Unsmiley face.
Posted by Alexis, Baron von Harlot at 3:59 am 8 comments:

1. There were six pickled fœtuses at the Phyletisches Museum today. Human fœtuses: one aborted at four weeks, one at eight weeks, one at twelve weeks, one at sixteen weeks, one at twenty-four weeks, one at thirty-three weeks. Some of them were curled against a preserved slice of uterus, cut away so that you could see the tiny limbs tucked into the tiny body. They're suspended in formaldehyde, and arranged so that you imagine it's the same fœtus aging. I found myself talking to the biggest ones, as if they were babies, and alive, and needed comforting. Whose were those uteruses?

2. In the same room, there is a chart – a recent chart, inspired by the Out-of-Africa hypothesis – that illustrates the degree of relationship and distance between the human races. Races, so called. There's no human race that can't be undone with a single act of sexual reproduction. Not that you'd think so, to look at this chart.

3. One of the stranger papers at the conference last week was titled "What Women Want - Men Want Something Different". I'm of the "one is not born a woman" school, so I'm unreceptive from the get-go to evolutionary accounts of why "women" and "men" behave the way they supposedly behave. Even if I weren't, though, even if I thought I was nothing but my biology, and that my biology was something static and predetermined and identical with that of 51.2% of my species, this paper would have gotten my goat, by her beard. It went like this: women want men who will enable their babies to prosper, high status men with lots of money; men want women who are healthy and fertile, and monogamous, so that they can be sure that they're investing their paternal energy into their own offspring; there is no upper limit on women's desire for their mate's status and wealth; and so men are driven to relentless capitalism; cue – smoke-stacks, landfill, disposable ermine earmuffs; conclusion – the environmental apocalypse has been caused by women's desire.
Posted by Alexis, Baron von Harlot at 3:16 am 11 comments:

And from the blog with its finger on the pulse of the arterial system of the body of today ...

A Düsseldorfian antiques dealer has located Adolf Hitler's Mercedes. Chancellor Merkel attributes her staying power to peppermint tea. McDonalds in Germany is going to re-colour its logo green, to show its respect for the environment.

Well may you snort (I do), but these are all facts. I heard them over breakfast in the Hotel Thüringer Hof, and as everyone knows, in cheeso veritas.
Posted by Alexis, Baron von Harlot at 2:53 am No comments:

Very early on Wednesday morning, I landed in Munich. My coccyx was numb. Barely had the blood oozed back into my nethers than I was flying to Hannover, en route (i) noting that Munich's nuclear reactor resembles Springfield's, (ii) successfully negotiating, in German, the flight attendant's enquiry as to my tea/coffee preferences, and (iii) receiving a free newspaper, Bild, from Lufthansa, whereon were published Hot! Previously unseen! Photos! of Jackie Onassis! Nude! Thus initiated in the ways of the northern hemisphere, I caught the intercity speedzug to Göttingen, where I parked myself for four days.

So, here is Göttingen. 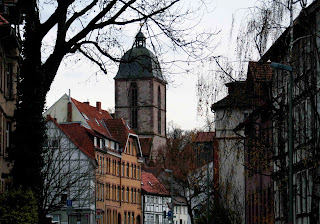 If you're keen on eighteenth-century observatories, canals, bakeries, statues of early Enlightenment scientists, or dauntingly multilingual German people, Göttingen is the town for you. It's also excellent if you like bicycles. There are many bicycles. 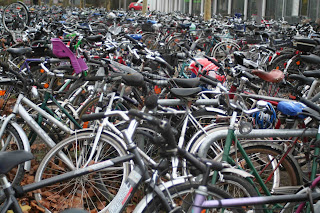 Here is a small selection of the bicycles to be seen cavorting outside Göttingen railway station.
And what was a nice chap like me doing in a place like that, you ask. Well, as it happens, I was getting all conferential on my ass. Best darn conference I've ever been to, in fact. On Mr Charles Darwin, M.A., and what the peops down in the humanities are doing with him. I could, of course, tell you more about that, but instead I will talk about cheese. 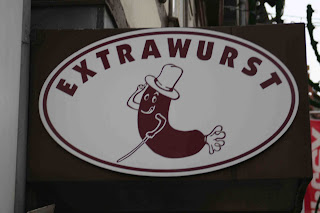 Exhibit A: Extrawurst sausage shop sign, proves that Germany is the most carnivorous country in the world

and the breakfast buffet is a sea of fleisch, in which are scattered islands of cheese, and the conference lunch is trays and trays of breadrolls slathered with dead pig, dead cow, dead chook, dead salmon, plus one tray of breadrolls slathered with dead cheese, und so weiter, I have eaten So Much Cheese, I am now SICK of cheese. I've had predictable ethical reservations about cheese for a while now, but as of the sixth consecutive cheese-based meal in a row (with cheese), I have aesthetic reservations to boot. To stinky old comes-from-an-udder boot. (N.B. these reservations do not apply to haloumi.)

Which brings me to today's lunch, Nüdeln mit Gemüse. Today I forsook Göttingen for a joint called Jena, which joint, unlike Göttingen, sits in the former Deutsche Demokratische Republik. You can tell that you're entering the former DDR, because, whereas two minutes ago, your train was easing its way through little dorfs with higgedly-piggedly wattle-and-daub houses - I'd call them Tudor, only it's the wrong country - now there are quadratisch, practisch, multi-storeyed grey erections squatting in geometric clusters. They're the same regulation apartment blocks you used to see in documentaries about Chernobyl or Ceauşescu. I'm more of a higgedly-piggedly oak-beamed ramshackle-o-phile, myself, but there's something sort of sublime about these apartment blocks. They subordinate the individual to the hive. You can feel your sense of self dissolving before something bigger, something unflinching in the face of individual difference or preference.

Here in this joint called Jena is another joint called Wok-Gourmet. Both those words sound pretty appealing to an overcheesed cheesephobe such as myself. Woks and I have enjoyed a long and rich relationship. Even typing this, I recall with affection the tofu green curry of May 2004. 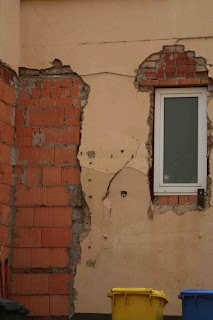 Jena.
Turns out there are only two vegetarian things in Jena Wok-Gourmet. The Coca-Cola and the Nüdeln mit Gemüse. Everything else looks like chicken schnitzel fried in a wok. The Gemüse, for those of you as interested in my lunch as I, turn out to be a handful of bean sprouts and some julienned carrot. Not exactly tofu green curry, but 100% cheese-free.

So what's a chap like me doing in a place like Jena? I'm here for Ernst Haeckel, evolutionary theorist, eugenicist, scientific fraud, and erstwhile Jenanite. Jena is Haeckel city. Someone at some stage has loved Ernst Haeckel so much they've named a street after him. 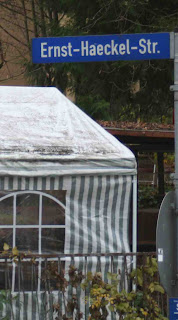 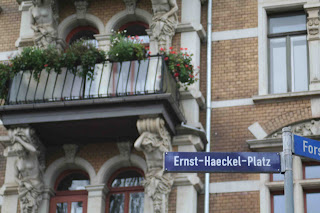 And behind the sign pointing to Ernst Haeckel Platz there is an apartment block festooned with gen-u-ine pre-Soviet caryatids.

Jena is home to Ernst Haeckel's former house, known today as Ernst Haeckel Haus, but in his day as the Villa Medusa. It's also home to Ernst Haeckel's phyletic museum, an institution he founded as propaganda for his theory (that ontogeny, the development of the embryo from fertilisation to maturity, recapitulates phylogeny, the evolution of the species). A huge ceramic oak is built into the museum's façade. This oak is Haeckel's tree of life, a sturdy symmetrical thing with humans at its apex. Darwin's tree of life is more like a tangle of seaweed. Humans are no more at its apex than ants.

I hadn't thought about this until today, but to have streets & stuff named after him, Haeckel must have been canonised by the DDR. There's a chocolate frog on the table for the first person to explain how this eugenicist (a member of Germany's - the world's - first Society for Race Hygiene), committed to biological hierarchy, gets himself turned into a socialist hero.

Meanwhile, back in Preston, Comrad Timsky is valiantly bestowing pats and Iams Kitten Growth Formula on Harriet and Beatrice. Thank you, Comrade Timsky. You're the bestest best besty ever.
Posted by Alexis, Baron von Harlot at 3:25 am 7 comments:

Who wants a chocolate frog?

You can have one if you tell me (truthily) what proper certified biologists do when they want to talk about the plural of "genus". It's "generes" in Latin. I thought that sounded a bit fancy for your garden variety sentence, so I tried typing "genuses", but Mr Microsoft Autopedant told me I was a pustulent hillock upon the dorsal skin of good usage.

Here, by the way, is the context: "Darwin’s sketches of the branching relations between [plural of genus], species, and varieties are, as he knows, foundational to his articulation of how biological difference comes to be in all its plenitude."

N.B. chocolate frog may turn out to be a metaphor for extreme kudos.

N.B.B. Apologies for "comes to be in all its plenitude". Euphony schmeuphony.

UPDATE: I am a Latin fraud. It's actually "genera", not "generes". Good night, then.

UPDATE THE SECOND: Am, like, totally embarrassed by this post, but I'm leaving it up to dispel myths of my omniscience. Ahem.