P.S. if my application is not successful, I will consider quitting my job and taking up as a professional spaghetti taster. You read it here first, comrades.

P.P.S. Dear Job, if you're reading this - not really. I'd never leave you. Even for spaghetti.
Posted by Alexis, Baron von Harlot at 4:42 pm 6 comments:

It's been Official Week of the Manky-Brained Harlot round here. The Sidekick and I left the bathroom window open on Sunday night, to facilitate the immildewification of said bathroom, and thereby instead facilitated the escapades of Intrepid Harriet. Out the bathroom window she slunk, down the neighbour's prickly conifer she clomb, into the neighbour's enclosed backyard she plunked, round the neighbour's chicken coop she sniffed, whereupon she realised she was verily stuck. Actually, that's my reconstruction. This is how it really went: at 10.30 we closed the bathroom window which had been opened for the immildewification of said bathroom and retired to the recumbent reading room safe in the knowledge that Harriet and Beatrice were hiding under their hard furnishings of preference; by 11.00, Beatrice was pillowing her head on my ankle, but Harriet hadn't emerged from under her hard furnishing; I searched the baronial premises; no Harriet. We remembered the bathroom window. We shuffled outside in slippers and jammies. "Oh, Harriet!" I stage-whispered into the night, so as not to antagonise the neighbours. "Why, Harriet!" Still no Harriet. And then I saw Leonard, perched atop Apartment 7's recycling bin and staring hard over next door's fence. I listened. Tinkle-jing. Harriet's collar. Sidekick, who's got the advantage of an extra 8 inches, looked over the fence, where sat Harriet, staring up at him, relief in her eyes.

"Oh, Harriet," said Sidekick. "It's you! Good girl! Thank God!" (We were worried, see, 'cause it's a rough neighbourhood, what with four lanes of traffic just around the corner, to say nothing of the menaces of Fat Cat, who lives a couple of houses down the street, and is all "I wuv you, I wuv you so much, I wuuuuuuuvvvvvvvv you, purr, purr", until he sees Hazza or Bea, whereupon he lets out a godawful air-raid-siren of a meow and squares himself up like a Staffordshire Terrier whose bone you've just admired.)

"My good man, if you think I can jump 1.85 metres straight into the air without serious inducement - and might I here suggest Tasmanian smoked salmon with King Island clotted cream and organic caper berries - you are sorely deluded," replied Harriet.

"I see," said Sidekick. "Well, perhaps you could follow me along the obverse of this fence and I will lead you to the neighbour's padlocked gate, under which you should be able to squeeze yourself, whereupon I will scoop you up and escort you personally back into your nice warm home."

"That's all very well," said Harriet. "But I cannot understand a word you are saying, and I wish you'd come up with a plan to get me out of this garden rather than blathering on."

And so Sidekick and I told Harriet she was a fine, fine cat, and suggested she try climbing back up the tree that leads to our bathroom window, which we promised her we would keep open, and then went back to the recumbent reading facility, where we lay awake for the next hour and a half, hoping, hoping, hoping that Harriet wasn't being molested by Fat Cat. Actually, we knew she wasn't, because she had set herself up in the corner of nextdoor's garden closest to the edge of our apartment block and was gazing longingly up at our window. Beatrice, meanwhile, lay on the window sill, gazing longingly down at Harriet.

At 2.30, we heard a scrabble and a thump. It was Harriet, figuring out how to climb back up the conifer. We cracked open the Iams cat biscuits, threw a bit of a party, and then went back to bed.

That, I submit, is the main cause of my manky-brainedness for the rest of the week. I managed to lose my phone recharger, forget - in the middle of a lecture - the name of the bloke who wrote Rousseau's autobiography, and leave my wallet and keys on my office desk on Wednesday evening, so that when halfway through my walk home I found myself with a pile of olives, peas, bread and toilet paper at the Coles checkout, it turned out that I was completely without funds. I spent the next hour and a half ambling through my neighbouring suburbs, plucking the ripe figs that dangled over people's fences. I was still home half an hour before anyone who could let me inside, so I checked the letterbox, and by the light of the silvery halogen streetlamp, read Medecins sans Frontiers' letter about tuberculosis so many times I was ready to give them my entire life-savings immediately - only my credit card was sitting in my wallet locked inside my office four kilometres away.

And that, ladies and gentlemen, is why a more sensible me would have invested in a fly-screen for her bathroom window three months ago, but all's well that ends well, blah blah.
Posted by Alexis, Baron von Harlot at 2:53 pm 8 comments:

Wherein I wish Gerard Henderson would go away

I've always understood a "think tank" as something similar to a "fish tank" - with Gerard Henderson paddling about, losing his memory every thirty seconds - but it's just occurred to me that the "tank" bit might be as in "armoured combat vehicle blindly trundling across the tundra".
Posted by Alexis, Baron von Harlot at 12:39 pm 5 comments:

Silence always means something, and round here it's meant that a week after I got myself officially with sidekick, my beautiful, boisterous, noisy, joyful father, one of my very best friends in the world, was diagnosed with mesothelioma. For two weeks after the diagnostic surgery, Dad was desperate to go home, longing for more time, exhausted by hospital and being prodded awake and reminded to breathe properly and catheters and thrush and nothing to eat but ice-cream and diabetic jelly and milk. He was saying every day how much he loved each of his kids, loved Mum, loved Mum more than anything, but after two weeks of that he stopped breathing.

We don't have proper rituals of mourning, not ones that I know of, so I've been bumbling around, giving lectures, keeping my office door closed, eating the sidekick's biscuits, crying every day for the last five weeks – mostly when someone asks me how I am, or I re-read Hamlet, or try to phone my oh-so-splendid mother and be brave for her. Brave for her. God knows, I knew it would be sad when it happened – but even when he had cancer ten years ago, and we joked about the stories we'd tell at his funeral – it never seemed possible that someone so stouthearted and loud and solid could die. My Dad, who spent the last sixty-five years of his life making up for WWII cream rationing, who in 2003 walked up to a riot squad cop outside Philip Ruddock's house and demanded, demanded in the name of Australia (go, Dad!), that the cop stop pulling a protester by her hair, who divided his toast equally with the dog. He said he and Mum had four children before they worked out what was causing us. He would cry in ghostly tones from the far end of the house, "Coffee for your poor father". He pronounced vegetables with four syllables for fun. He'd get cranky with the tv when ever anyone said "vunrable" instead of "vulnerable". He quoted bits of poems at apparently irrelevant moments – "Butting down the channel in the mad, March days", "Young Lochinvar has come out of the West", "Margaret, are you grieving?", "But if we fail, we fail", "Water, water everywhere", "Under the spreading chestnut tree". He only ever wore grey socks, except when he had on his fawn shorts and then he'd wear fawn socks, and as long as I can remember, he's worn white underpants and a white singlet. He'd eat pizza with abandon, saying, "Have you ever seen a dead Italian?" Sometimes he'd eat Chinese take-away with abandon, saying, "Have you ever seen a dead Chinaman?" He'd encourage me to take a piece of beef, saying, "The cow's completely vegetarian." Or "This is the poor man's lettuce." He called the radio the wireless, and spoke lovingly of crystal sets, and relief maps. He planted trees. He sexed potatoes. For about two years, he worked his way through each of the recipes in the Charmaine Solomon curry cookbook.

When I was a kid, I spent most Saturday afternoons at the beach with my father. There was always an ice-cream ("If your mother asks, you must tell her the truth, but no need to say anything about ice-cream if she doesn't"), and usually a trip to the nursery, and a great sprawling chat in the 45 minute drive home from the sea. When I was fourteen, writing a short story about apocalypse-by-laser-gun, Dad drove me to the Sydney University physics library so I could read up on electromagnetic radiation (I spent six hours working out the cataloguing system). He'd always offer to test me before Latin exams. "Hic haec hoc," he'd say, infuriatingly. "What does that mean?" He'd similarly test my sisters, who could do dizzying things with maths: "What are five sevens? Two plus two?" He'd drive me to music rehearsals, sit outside for two hours, drive me home again, and the talks we had were glorious: God, communism, eating animals. I didn't ever ask him if the lifts were a trouble, I don't think; it was understood that he'd enjoy ferrying me around. 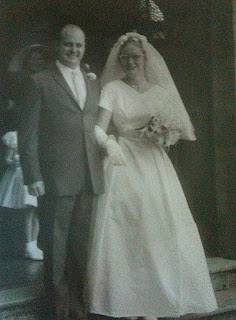 I'm writing this because my mother told me last weekend that she wanted me to keep putting stuff here, but before I can put stuff here, darling Mum, I have to say something about the hole in our world. You know how much Dad loved you, and I hope with all my heart that he is somewhere now, surrounded by Devonshire teas and scruffy stout dogs, loving you still.
Posted by Alexis, Baron von Harlot at 6:30 pm 23 comments: