The word for today is Sitzfleisch. If, like me, you immediately inferred from this word's German components - sitzen, to sit, and Fleisch, flesh - that it referred to the additional padding of the bottomular region arising from one's deskjob, you would be, like me, wrong. In fact it means something like "staying power". Sitzfleisch is the stuff that keeps you resolute in your chair when all others have run off into the gloaming to chase butterflies.

P.S., while considering synonyms for "bottomular region" (dismissing "derrière" - too frou-frou - and "sit-upon" - too Girl Guides-ish), I googled "the fundament", and happened upon this essential information: the ancient Athenian punishment for adultery was the insertion of a radish "up the fundament" (quoth my source), a sentence so regularly meted out that the verb for "I insert a radish up the fundament" was ραφανιδοω (rhapanidoô), from the Greek for radish, ραφανος (rhaphanos). People pay big money for that kind of treatment these days. And radishes aren't cheap since the floods either.

So there you go. Lexicon Harlot, Demonstrating that You Can Chase Butterflies without Leaving Your Deskchair since 2006.

P.P.S., I just realised that I have made light of state-mandated sexual assault. If you are reading this and you are a legislator, please be advised that the radish manoeuvre described above constitutes a violation of a person's human rights according to international law, and furthermore that radishes are only nutritionally valuable if taken orally and consensually.
Posted by Alexis, Baron von Harlot at 5:14 pm 7 comments:

Nothing could induce me to misuse my employers' webcam facilities except the direst necessity. Recording this, for example.

Which I had to do because there are people, actual people, who want to know how I pronounce things. As in, words. And syllables. In fact, Kate O, who is one of the best internetians everrrrr, went so far as to write, "It would please me to NO END if you and [some other person – doesn't matter who] made an accent video!!" Two exclamation marks. That's her way of saying that if I don't expose y'all (her locution) to my pronunciation of the word "pecan" she will probably die of phonological curiosity. And I couldn't have that on my conscience.

So, here's the deal. People in on this global Anglophone accent game are required to:

1. disclose their regional identity (like, I live in la la Lalor, but I used to live in Preston, but my cats come from Coburg, and that's probably influenced my accent in certain indefinite ways);

I don't know about my accent, but my oral sentence structure is one of the seven wonders of the post-Apocalypse. (Also, I think I look rather world-weary and ho-hum-isn't-this-nerdy, in my own surpassingly nerdy sort of way, whereas I'm not weary of the world (I love you, world) and I was delighted to be doing this, so I can only attribute any arch eyebrow raises and fatigued vocal intonations to the fact that it was Something Late O'Clock in the House of my Employers.)

And here's my question for you, gentle reader, on a scale of 0 to 10, where 0 means "Can't I just go to bed already?" and 10 means "Hot Dawg! Yes! My word!", how much do you think I sound like a person raised in Sydley and migrated to the 'Bourne? And what do you call gym shoes?
Posted by Alexis, Baron von Harlot at 8:47 pm 18 comments:

Here is some of who I miss:

1. crinkly grizzly bear eyes,
2. the bald expanse from his ear to his other ear, which he referred to as his "wide part",
3. and when he saw another bald man, he would say "There's a man who goes to my barber",
4. and when he saw an unambiguously pregnant person, would say, "I know her little secret" (which was funny, even if it doesn't sound it right here)
5. and when he saw a grown man of impressive girth (which he was, mostly, himself), would say, "He'll be a big chap when he grows up",
6. and when he saw a terrier or a poodle the size of his shoe, would say, "That's a ferocious looking beastie",
7. and on long drives he'd sing the 23rd Psalm to the tune of "Advance Australia Fair"
8. and "A poor bird, take thy flight, far above the so-o-rrows of this sad night", jauntily,
9. and he used to refer to the "Te Deum" as the "Tedium"
10. and he seemed to become increasingly involved in our birthday presents as he got older
11. and took us as often as he could to the sea, crammed his shirt pocket with the flotsam I found on the beach, let the week leach out of him in the salt warm surf, bought irresponsible quantities of ice-cream for his children,
12. and watched consecutive news broadcasts on three different television channels
13. and was weak in the presence of cream,
14. staaaaaaaaaaaarrrving beagles,
15. plant nurseries,
16. and gradually grew out of reading the real estate pages out loud over breakfast (phonetically, i.e., "three bdrm, two bthrm, one-eighty-thou ono")
17. and invented toast with vegemite and marmalade
18. and was enthusiastic, at various times, about such things as yurts, no-dig vegetable gardening, potato sexing, curry making, liquid manure in fibreglass vats, torulosa pine windbreaks, MG convertibles, pineapple plantations, refugee activism, mud bricks, punning,
19. and he gave me, he and Mum, this feeling of completely belonging,
20. even though I was their "little mistake afterthought".

Death can seem so blunt and stupid.
Posted by Alexis, Baron von Harlot at 9:10 pm 19 comments:

You'll never believe this, but I was a bit of a booky two-shoes at school. My worst ever mark was awarded in year 7, in a subject then referred to as "Craft", but which, I'm almost certain, was shortly thereafter rebadged as "Listening to Mrs Hanlon Tell You How Her Son Developed Pubic Pimples As A Result of Wearing Tight Lycra Underpants". I quite enjoyed "Craft": the lack of homework, the dermatological advice, the forty or so dress-making pins I collected from behind the sewing machines. If there'd been extra points for the thrifty acquisition of other peoples' poorly husbanded pins, "Craft" would never have become my own personal toothy bête noir of scholastic failure.

I didn't technically fail "Craft". I scored 55%, a pass, which enabled me to leave year 7 and permanently avoid any further insights from Mrs Hanlon upon synthetic fibres. It felt like a fail, though, dripping and oily with condemnation. Mrs H had noticed that I'd spent the entire term collecting pins and stitching a single pants pocket with such rigour that I'd virtually sewn it shut. I'd done nothing but sew that pocket - unpick it and sew it again, trim it with lace, embroider it with daisy stitch – because in week 3 I had lost all the other pieces of my shorts project. "Lost", I say, but when I think of my own depredations upon the pins, it seems more likely that they were stolen. For the brisk underground trade in unsewn pants pieces. Probably exchanged for cocaine or chocolate buttons or whatever it was my hardened criminal schoolmates were into back then.

So I get a bit of a "Ha! I've shown you, Mrs Hanlon!" moment every time I sew something and it turns out sort of okay. Which more and more of my sewing projects are required to do, because I recently pioneered Project Never Buy Clothing Again.

There is no proper rationale behind Project Never Buy Clothing Again. It's a bit to do with this situation: 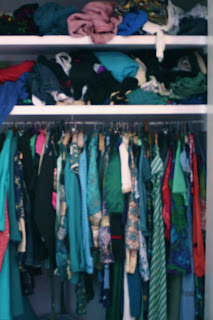 On the weekend, in between not writing the conference paper I'm giving on Friday, and the book chapter that I scheduled for completion in January, I figured out how to make underpants. 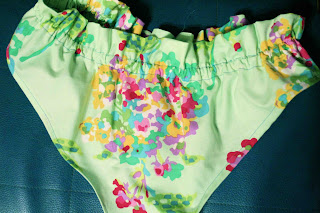 My underpants!
And so now I present to you the Lexicon Harlot Quick & Easy Guide to Making Your Own Underpants at Home:

1. Cut out an underpantoid bit of fabric. Do not use lycra. 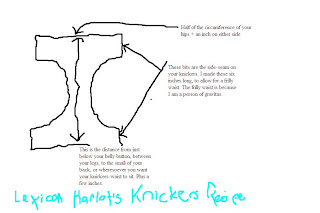 Click on image to enlarge (what fun!)
2. Hem the leg-holes, taking care to press the seams at every opportunity.

6. Embroider with your initials, or "I heart Andrea Dworkin", or whatever.

7. And now, having girt your loins with this serviceable and comfy undergarment, write your conference paper. There is no no no no no excuse not to.
Posted by Alexis, Baron von Harlot at 9:48 pm 10 comments:

They don't do science like this anymore; or, Darwin keeps making me cry

"The second case was that of a Hindustani man, who from illness and poverty was compelled to sell his favourite goat. After receiving the money, he repeatedly looked at the money in his hand and then at the goat, as if doubting whether he would not return it. He went to the goat, which was tied up ready to be led away, and the animal reared up and licked his hands. His eyes then wavered from side to side; his mouth was partially closed, with the corners very decidedly depressed. At last the poor man seemed to make up his mind that he must part with this goat, and then, as Mr Scott saw, the eyebrows became slightly oblique, with the characteristic puckering or swelling at the inner ends, but the wrinkles on the forehead were not present. The man stood thus for a minute, then heaving a deep sigh, burst into tears, raised up his two hands, blessed the goat, turned round, and without looking again, went away."

- Charles Darwin, The Expressions of the Emotions in Man and Animals
Posted by Alexis, Baron von Harlot at 12:47 pm 5 comments: