The imminent travels of Lexicon H.

I'm off to Germy-land in exactly eighteen sleeps, and in between marking essays, and brewing my conference paper, and deciding what colour to do my powerpoint slides in (Lady of Shallot green and Robert Browning beige or Stick With What You Know black and Keep Sticking With What You Know white?), and keeping an anxious eye on the town well, and losing sleep – several sleeps – over people I enormously respect who think that comparing the way we treat non-human animals with humans' experiences of racism trivialises humans' experience of racism (which it certainly does, if you are of the opinion that the fact the world is knee-deep in barn-raised chicken carcasses is absolutely inconsequential, or even just not very consequential, or indeed requiring anything less than urgent revolution) – and in between not blogging, I have been brushing up on my Tscherman.

But why am I telling you all this? Warum? Warum? Because Ecce Homo is - surprisingly - hilarious. Or - the popular theory - the work of a nutter on the verge of deliquescing irretrievably into public lunacy. But I prefer to think of it as hilarious, and I cite in defence of my amusement the following chapter titles: "Why I Am So Wise", "Why I Am So Clever", and "Why I Write Such Good Books". Take that, autobiographthingies the world over. They don't call him a genius just because his moustaches look like a couple of oversized mice protruding from from his nostrils.

F. Nietzsche with Moustaches, portrait pilfered from here.
And that's the end of my story. If you have any good German words to share (bearing in mind that I already know Regenschirm, Dudelsack, and Schildkröte), let me know.
Posted by Alexis, Baron von Harlot at 4:07 pm 18 comments:

And now on account of how I ain't been bloggin' nothin'

Why write when you can quote?

"I have been through some terrible things in my life, some of which actually happened."
- Mark Twain
Posted by Alexis, Baron von Harlot at 3:42 pm 1 comment:

From the blog that brought you such seismogeometeorosensations as Hey, was that an earthquake? and Hot diggety dang that was another earthquake comes Hail in Preston, the acclaimed miniseries starring all new hot talent, including

the carpark, next door's backyard, and the fence that kept them apart 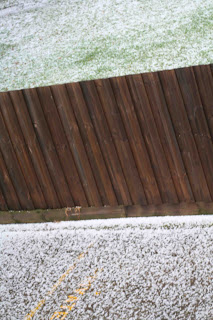 the apartment stairway that wouldn't say die (unless you forgot to wear your extra-traction boots, but then it tended to say die as in "Die!", not die as in "Oh noes, I die!") 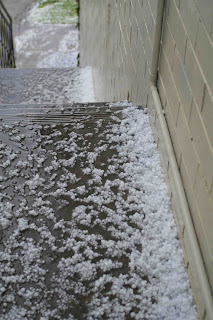 the corrugated iron roof with the heart of asbestos 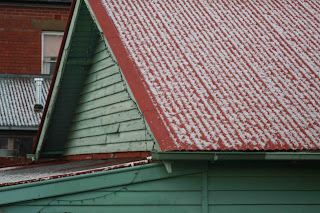 and of course, Harriet and Beatrice, who, despite their keen interest in freaks of precipitation, elected to spend the entire hailstorm pluckily guarding the underside of the armchair 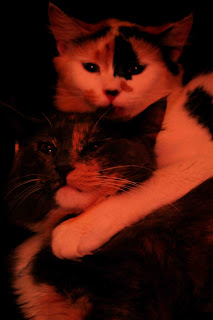 Restores my faltering faith in the Bureau of Meteorology, this does. The BoM predicted a hail storm for today, and lo, there was a hailstorm, which makes a pleasing change from the arrant untruths it has been issuing for the past week. Arrant untruths, I tell you.
Posted by Alexis, Baron von Harlot at 6:48 pm 6 comments:

Well would you look at that? If it isn't the old internet requiring my urgent perusal

“Usually writers will do anything to avoid writing. For instance, the previous sentence was written at one o’clock this afternoon. It is now a quarter to four. I have spent the past two hours and forty-five minutes sorting my neckties by width, looking up the word paisley in three dictionaries, attempting to find the town of that name on The New York Times Atlas of the World map of Scotland, sorting my reference books by width, trying to get the bookcase to stop wobbling by stuffing a matchbook cover under its corner, dialing the telephone number on the matchbook cover to see if I should take computer courses at night, looking at the computer ads in the newspaper and deciding to buy a computer because writing seems to be so difficult on my old Remington, reading an interesting article on sorghum farming in Uruguay that was in the newspaper next to the computer ads, cutting that and other interesting articles out of the newspaper, sorting – by width – all the interesting articles I’ve cut out of the newspapers recently, fastening them neatly together with paper clips and making a very attractive paper-clip necklace and bracelet set, which I will present to my girlfriend as soon as she comes home from the three-hour low-impact aerobic workout that I made her go to so I could have some time alone to write.”