I've just whipped up (and et) this spankingly wholesome quinoa rogan josh curry thing, and am glowing mystically with the goodness (blah) of quinoa sourced from the snow-spangled mountains of Bolivia, plump Black Russian tomatoes plucked from One of My Very Own Plants, and silverbeet snipped fresh from our front garden silverbeet plantation all of forty minutes ago. Also with the goodness of half a caterpillar, whose demise I attribute to my cavalier approach to silverbeet washing. And there we have the end of Vegan March.

One of the consequences of husbanding my own personal incipient vegetable forest is that I have become less and less kind-hearted towards snails. Snails are lovely people: romantic, resistant to patriarchal gender constructs, skilled in the consumption of bills left in slightly damp letterboxes. I have long recognised their virtues. And yet, as hordes of snails have chomped their way through my beans-cosmos-honesty-rocket-silverbeet-etc, romanced each other willy-nilly on beds of lucerne mulch, and spawned an irresponsibly large progeny, 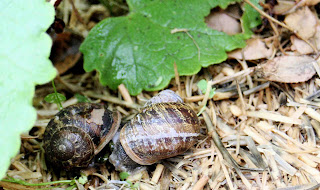 Snails romancing each other willy-nilly on a bed of lucerne mulch.

I have lost all compunction about displacing them onto the oval, and indeed, in my less empathic moments, have actually administered a swift and firm mollusc-murdering stomp. It occurs to me that if I, who am philosophically committed to the principle that humans are - but should not be - self-serving psychopathic chauvinists in their relations with other animal species, can flounce about the garden spiflicating wholly innocent gastropods, then it's entirely likely that the Bolivian quinoa farmer would do likewise, only more so. Am not actually sure whether there are snails in the Andes, or whether they'd go for quinoa, but you understand my point: no agriculturalist whose livelihood is at stake is going to exercise herself too much about the rights of snails. Or about the rights of rabbits, starlings, mice or kangaroos. And probably not very much about the myriad animal species that are displaced by monoculture cropping, and displaced and displaced until there is no place for them. Which is say, just because I'm veganising, doesn't mean that the production of my food doesn't require the suffering of animals. It's just that, instead of eating them, I'm competing with them.

Having once again depressingly aborted my quest to exempt myself from the exploiter class, I will add, in defence of herbivorism, that pastoralists are just as unkind to animals that compete for their flock's food supply AND of course send almost every member of their flock to the slaughterhouse. (Even commercial freerange egg-laying chooks are packed off to the chicken stock factory at the age of eighteen months or so, because it ain't worth spending money on chicken feed for a lady who lays less.)

Okay. I really have to go now. Am starting to think embittered thoughts about injustice to chickens, when all I wanted to do was report on the presence of half a caterpillar in my curry.

Are you saying we should take up escargot dining? Because I know a snail who knows a snail...

Erm ... this is almost as good as my plan to fix the locust plague with an array of quick and delicious recipes, but no.

(I did eat some snails once, in a restaurant in Mittagong, when I was about ten. There was a 5:1 butter to snail ratio.)

I believe once the snails get wind of this latest French-leaning menu tendency, their numbers may decline dramatically.

Mitzi, I did seriously entertain the idea of eating the snails, and were it just a case of obliterating them with a boot and chucking them in a pan, I might well swallow my repulsion and go for it - in the interests of snails not dying in vain - but it turns out that the snails have to be kept for SEVERAL DAYS without food, emptying their tums, and then they are salted - live - to force them to exude all their slime, and while I don't think snails are the sentientest invertebrates on the tree, I reckon they'd know pain and hunger when they felt it.

"I did seriously entertain the idea of eating the snails..."

I hear Slow Food is all the rage

They love beer and will drown in it quite happily (I've known men like that).
Or there is the tried and true method of my nephew, in his snail hating young days, place a board on top of several snails, jump high and land heavy. The board protects one from squash splash.

I, myself, am waging war on millipeedes, loathe the crawlers.

Jahteh: the beer trick is excellent. I remember my mum trying it, but as I recall snail-flavoured beer proved just a bit too irresistible to a certain beagle. Now she saves up crushed eggshells and sprinkles them round her seedlings. (We don't have an oversupply of eggshells round here, but I could try sawdust or something similar.) Or - no beagles round these parts - just go for the beer-trap. Thanks.

Don't I recall something about coffee grounds?

Unless you're off coffee, of course.

COFFEE GROUNDS! Genius! That way noone has to part with their beer. Thanks, K.

I rest my case.

That's a very excellent little essay on the business of snail/slug disposal. Given the feline/avian/possumular population round here, I wouldn't use poison of the Blitzem variety even if the lingering enfrizzlement of snails didn't trouble me. But coffee grounds (perhaps plus beer traps) sound like a relatively nonhazardous way of doing the snails in. Unless you're a snail, of course, in which case you're perfectly entitled not to feel grateful for the comparative lack of hazard.

Not that you, Kerryn Goldsworthy, are in any respect a snail.